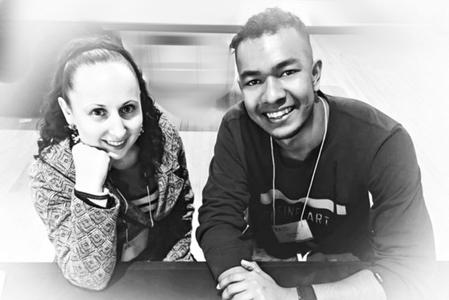 For years Naliyah Kaya had been frustrated by the lack of graphic tees and accessories available to the bi/multiracial community. When she did find items, they often fed into stereotypes promoting the exotification of multiracial people or advanced the postracial utopia myth. In 2013 she met designer Alex Pryor when she became the Coordinator for Multiracial & Native American Indian/Indigenous Student Involvement at the University of Maryland College Park. Alex was part of the Multiracial Biracial Student Association (MBSA) and was the highly sought after student designer for the Office of Multicultural Involvement & Community Advocacy (MICA). They began working closely together on events and marketing for the multiracial community at UMD. In 2017, Naliyah was brainstorming Multiracial Heritage Month themes and came up with Mix-Represented as a play on words referencing how multiracial experiences are often mis-represented and/or missing. She began sketching slogans and designs for an apparel line with a social justice focus for the multiracial community. Naliyah then ran the idea by Alex, who quickly went to work on the logo and bringing the apparel sketches to life. Co-founded in 2018 by Naliyah & Alex Mix-represented debuted at the Critical Mixed Race Studies Conference at the University of Maryland College, Park.